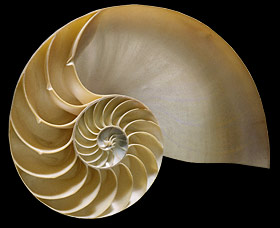 What The Golden Ratio Is

The Medieval Mathematician, Leonardo Fibonacci of Pisa, Italy, in his treatise, Libre Abaci (1202), showed that a sequence of numbers existed both in nature and in man-made structures and items, which form a spiral. This sequence, referred to as the Fibonacci Sequence, begins with two ones, and then each succeeding number is equal to the sum of the two numbers that precede it, in this way:

There is a single real number which this pattern approaches. This number has been illustrated in the form of a quadratic equation, whose positive root is always 1.6180339887... and is represented by the Greek letter Phi.

Phi is known as The Golden Ratio, and was originally discovered by Euclid ("Elements", 300 B.C.), in Ancient Greece, over 2000 years ago as the result of the vital role it plays in the formation of the Pentagram and its Magickal attributes.

The Ancient Greeks believed that the proportion Phi : 1 was the most visually, perfect proportion. The Golden Ratio forms a spiral. This spiral is illustrated using squares whose lengths correspond to the above noted Fibonacci Sequence, which then spiral outward from 1, 1, onward to form a clockwise shape equal to the ratio of the length to width. This ratio exists at each step; from the greater to lesser. 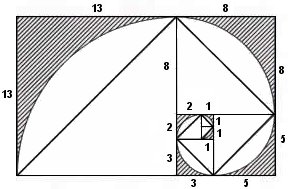 What Makes The Golden Ratio So Significant?

The Golden Ratio is reflected in the architecture, sculpture, and other artwork of the Ancients, from Greece to Ancient Egypt. However, this ratio is also naturally occurring in nature, including our Universe.

One of the most famous examples of this ratio occurring in nature here on Earth is in the Nautilus Shell. Its growth is governed by the Fibonacci Sequence, resulting in The Golden Ratio or Golden Spiral. This ratio also occurs in Rose petals, Sunflower seeds, various trees, Pine Cones, and certain plant stems.

The Golden Ratio was also implemented by the creators of the Great Pyramids, and the Parthenon. Some scholars believe it was also implemented into such later great works of art as the Mona Lisa, and The Sacrament of the Last Supper (Da Vinci; Dali). It has been found in works of poetry, musical compositions, human biology, physics, and within the patterns of the stock market.

From Ancient Times to present day, numerous great minds have been fascinated with the Golden Ratio. Some of these include:

Pythagoras, who believed this proportion to be of such perfection, stated that The Golden Ratio "revealed the hand of God". Kepler believed it to be "the greatest treasure of Geometry". (The Golden Ratio: The Story Of Phi, The World's Most Astonishing Number, by Mario Livio)

An explanation of the significance of The Fibonacci Sequence, The Golden Ratio, and Creation, would not be complete without the mention of Pascal's Triangle (Blaise Pascal was a renowned French Mathematician and Philosopher). The ratio shows itself in mathematics in other shapes, aside from the square mentioned earlier. It manifests as the sums of oblique diagonals in Pascal's Triangle in this way:


While some scholars claim that Pascal's Triangle was originally constructed in Ancient China, it is agreed by most that Pascal was the first individual to discover the significance of the numerical sequence it contained.

The important thing to note here is that the Golden Ratio, while not found in all things and while not always found in certain things or places where it has been claimed to have been, IS found in so much of what exists in our world and the Universe that it is impossible to ignore its importance.

What Is The Golden Ratio Telling Us About Creation?

"Far from being just a curiosity, this sequence recurs in structures found throughout nature - from the arrangement of whorls on a pine cone to the branches of certain plant stems. All of which is astounding evidence for the deep mathematical basis of the natural world."

Agreed, but what about its spiritual significance with regard to Creation?

Let's recap what the Golden Ratio, 'relative' to the Fibonacci Sequence, in another visual way:

"This Golden Ratio truly is unique in its mathematical properties and pervasive in its appearance throughout nature. The “mathematically challenged” may be more interested in the appearances of Phi in nature, its application to art, architecture and design, and its potential for insights into the more spiritual aspects of life, but let’s begin with the purest of facts about Phi, which are found in mathematics.
Most everyone learned about the number Pi in school, but relatively few curricula included Phi, perhaps for the very reason that grasping all its manifestations often takes one beyond the academic into the realm of the spiritual just by the simple fact that Phi unveils a unusually frequent constant of design that applies to so many aspects of life. Both Pi and Phi are irrational numbers with an infinite number of digits after the decimal point, as indicated by “…”, the ellipsis.

Now, moving into the Spiritual significance of the Golden Ratio, many of you already know that it has been described as Divine as it allows for human insight into a grand design that was once a hidden link between the seen and unseen. Throughout history, we have historical records that inspire such consideration.  The Ark Of The Covenant was based on a 5 - 3 proportion, as instructed to Moses by God. As a result, the ratio is 1.666 (while this is very slightly off, it is also too close to simply be dismissed). The Kaaba of Islam (Mecca), is located extremely close to the Golden Ratio of the distance between our North and South Poles (given land shifts over time, is it possible it was in the exact position when it was first designed and built?) The symbol for Phi is a circle with a vertical line through the centre of it. Could this be a representation for the Void (nothing), then divided by 1 (unity), to create the Universe? (Something from nothing?) 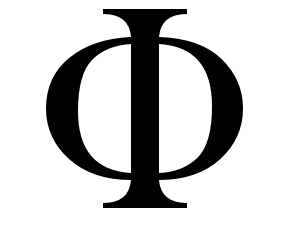 While some believe that there is evidence in the Golden Ratio of Divine Design in Creation, others see it as 'hogwash'. It is always up to each individual as to what they do or do not believe, however, before you, hopefully, take some time to ponder Phi, let me share with you, in conclusion, how the ratio relates to the human body, specifically, keeping in mind that body, mind, and spirit are always linked:

The Human Body has many patterns of 5, and as Phi is based on 5, let us examine some examples that exist within our bodies, and then how these fit with the calculation for Phi.

We can now look at how 5 is also the basis for the calculation of Phi, below:

As you can see, the end result of the equation is correct for Phi.

Near the start of this piece I mentioned that Euclid discovered the significance of Phi due to the spiritual significance of the Pentagram. Here again, we have the number 5. When we observe what has become known as The Vitruvian Man, again we have a link to the number 5, and the basis for Phi.

"Marcus Vitruvius Pollio, Roman architect (c. 25 B.C.), remarked a similarity between the human body and a perfect building: "Nature has designed the human body so that its members are duly proportioned to the frame as a whole." He inscribed the human body into a circle and a square, the two figures considered images of perfection. It is widely accepted that the proportions in the human body follow the Golden Ratio."

DeVinci saw the Vitruvian Man (and therefore, us), as the astronomical, geographical, and geological manifestation of the Universe (Macrocosm), on the Material Plane (Microcosm), and the way our bodies work to be analogous with how the Universe works. Once again I seem to be leaving you with an ongoing theme, and a personal truth of mine, to ponder:

All of the answers to all of the Mysteries of the Universe, exist within you.

(The Golden Ratio: The Story Of Phi, The World's Most Astonishing Number, by Mario Livio)